Out Now: Newmoon – Nothing Hurts Forever

0
Oasis. This is the group that Newmoon would like to tour with. And that’s no surprise once you’ve heard ‘Nothing Hurts Forever’, the new album by this Antwerp and Ghent-based alternative rock band. The shoegaze of their outstanding debut ‘Space’ has been swapped for a more melodious approach. Less grit, more light. Still wanting to hold tight but also daring to let go again. What did remain is the freshness that each of these nine new songs exudes.

‘Nothing Hurts Forever’ was produced by Andy Savours (The Pains of Being Pure at Heart, My Bloody Valentine, The Horrors etc.). The recording, which took place last autumn at his small Wolfden Studio in Camden Town (London), was a revelation for the band. It became a cocoon for the five band members, where they were able to push their boundaries, allowing the band to step outside their comfort zone. Newmoon created most of the songs in the studio: almost all tracks were played live. No click tracks, no kerfuffle. Very organic, you hear it in every groove of ‘Nothing Hurts Forever’.

Newmoon allows each song to breathe, searching and finding the right dynamic every time. There is much less emphasis on the heavy element than in their debut. From opener ‘Let it End’ to the closing ‘Only You’, the tracks sound simpler, but turn out to be more complex after repeated spins. “Andy’s approach helped guide us to walk paths we never would have dared to take otherwise,” says frontman and guitarist Bert Cannaerts proudly.

The five childhood friends grew up with Joy Division and The Cure and already have a previous incarnation as the hardcore punk band Midnight Souls. The band took their name from a record by Elliott Smith and they have now been playing together for nearly six years. After the first EP (‘Invitation to Hold’) in 2014, their first full album ‘Space’ followed in 2016 with much critical acclaim.

That summer, Newmoon was rewarded for their hard work with a successful set at Pukkelpop, where they absolutely raised the roof. The band toured England, France, Switzerland and Germany and got to open for Editors in Brussels. In May of this year a lot of new songs were tested on stage when they supported dEUS on one of their ‘The Ideal Crash’ anniversary shows. Today Newmoon feels completely ready for a new chapter. This group is ready to take the center stage and make you fall in love with ‘Nothing Hurts Forever’.
Out Now: Newmoon – Nothing Hurts Forever2019-10-132019-10-13https://throughloverec.com/wp2017_img/logo_header.jpgThrough Love Recordshttps://throughloverec.com/wp-content/uploads/2019/10/a3835742974_10.jpg200px200px
Info & Contact 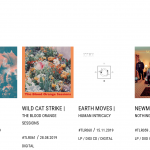 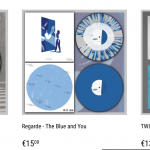